For more than one hundred years the mission of the Phoenix Police Department is to protect life and property, prevent crime, and detect and arrest offenders. This is accomplished by enforcing all federal, state and local laws over which this Department has jurisdiction.

Our Police Department is committed to service and takes positive action to maintain high standards in response to the Community we serve. It is crucial that every Officer with the Village of Phoenix Police Department remember that in the execution of this mission, they respect and protect the rights of individuals and perform this mission with honesty, courage, fidelity and sound judgment.

Each of our Officers must seek and preserve the public confidence by acting in a fair manner at all times, thereby protecting the constitutional rights of all persons.

In the late 1970’s the country was experiencing a noticeable rise in crime and violence. Naturally this was affecting all communities, both large and small. Police administrators and community leaders determined that to ensure that peace and tranquility prevail, it became a priority to establish a mechanism within their agency that would recognize these acts of crime and violence, record data, and interpret the information so that we could effectively deal with promoting safety and prevention of crime. Today, this is accomplished via computers, the sharing of information with other law enforcement agencies, and informing the public through the media that we are committed to keeping our community safe. Presentations to schools, churches, and senior citizen groups are another tool we utilize to educate the public and, more importantly, receive feedback from them.

In addition, the Village of Phoenix Police Department works closely with the New York State Crime Victims Board. Crime victims may be eligible for compensation through that agency for items such as: lost wages, medical expenses, counseling, funeral expenses, essential personal property, occupational rehabilitation, moving expenses, or crime scene clean-up. For more information call the Crime Victim’s Board at 1-800-289- 9747.

Village residents requiring a police officer’s assistance should always call 9-1-1. The administrative telephone line is 315-695-2001 but should not be utilized if an Officer presence is required.

Chief Martin (Marty) Nerber has resided in the Phoenix area since 1998 where he and his wife have been raising their family of boys, busy in the community with Pop Warner football, basketball and a little baseball. The Chief brings over 21 years of law enforcement experience with him from various departments throughout his career. Starting his career in 1992 at the Ellicott Police Department, a rural town in Chautauqua County, until he transferred to the Town of Clay Police Department in 1994. Chief Nerber worked his way from Patrolman, spending seven years as a Detective until he was promoted up through the ranks to Lieutenant. The Town of Clay Police merged with the Onondaga County Sheriff’s Office in the summer of 2008, he transferred into that Department where he still holds the rank of Lieutenant assigned as a watch commander. The Chief enjoys kayaking, hunting, fishing and spending time with his family. 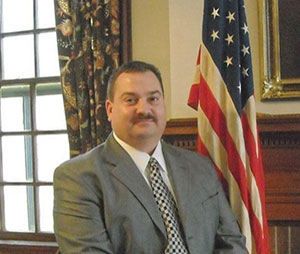